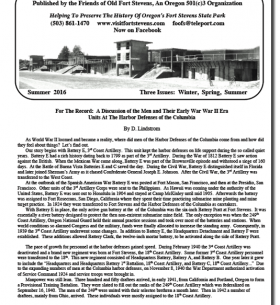 Excerpt from our newsletter:

For The Record: A Discussion of the Men and Their Early War War II Era Units At The Harbor Defenses of the Columbia

As World War II loomed and became a reality, where did men of the Harbor Defenses of the Columbia come from and how did they feel about things? Let’s find out.

Our story begins with Battery E, 3rd Coast Artillery. This unit kept the harbor defenses on life support during the so called quiet years. Battery E had a rich history dating back to 1799 as part of the 3rd Artillery. During the War of 1812 Battery E saw action against the British. When the Mexican War came along, Battery E was part of the Brownsville episode and withstood a siege of 160b days. At the Battle of Buena Vista Batteries E and C saved the day. During the Civil War, Battery E distinguished itself in Florida and later joined Sherman’s Army as it chased Confederate General Joseph E. Johnson. After the Civil War, the 3rd Artillery was transferred to the West Coast…… (Select here for the full newsletter)