Fort Stevens, named for General Isaac Stevens, a former Governor of Washington Territory, was constructed by the U.S. Army toward the end of the Civil war and remained active through World War II. The fort was built to protect the North against an English invasion from Canada, should the British join the Civil War on the Confederate side. In its long history, Fort Stevens never fired its guns in anger. 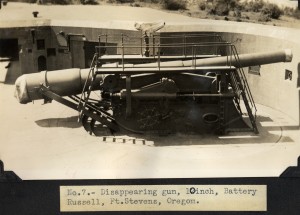 The original Fort Stevens consisted of an earthwork, a fort made mainly of dirt, and had gun emplacements and several buildings, all completed in 1865. To protect it from land attack, the fort was surrounded by a moat with a drawbridge. In 1897, as part of a nationwide program to improve coastal and harbor defenses, Fort Stevens started a massive refortification program. When the program was completed, eight concrete batteries – including mortars and long and short range rifles – were constructed. Fort Stevens was one of three forts built at the mouth of the Columbia River. Forts Canby and Columbia were on the Washington State side.

The principal armaments of the new Fort Stevens were 10-inch rifled cannons placed at Batteries Russell, Walker, Lewis and Mishler. Mounted on disappearing carriages, which hid the guns behind concrete and earth walls when not being fired, these guns could fire 617-pound shells at a distance of nine miles. To complement the 10-inch rifles, Fort Stevens was armed with 6-inch rifles at Battery Pratt and 12-inch mortars at Battery Clark. Also, to protect the mine fields at the mouth of the Columbia River, there were two small caliber rapid-fire batteries – Smur and Freeman. 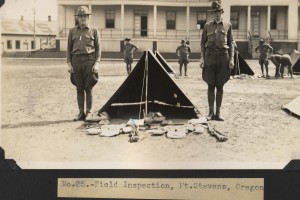 The Columbia River forts reached their peak of activity during World War II, when there were approximately 2500 men stationed there. To house all the troops, new barracks were constructed. At Fort Stevens, Battery 245, a new gun emplacement, was armed with two 6-inch rifles that had a range of about fifteen miles, almost double the range of the 10-inch rifles. Also a 90mm AMTB battery was placed on the south jetty.

On the night of June 21, 1942, Fort Stevens saw its only action when a Japanese submarine (the I-25) fired 5.5 inch shells in the vicinity of the fort. The shelling caused no damage. The Fort Commander refused to allow return fire. The incident made Fort Stevens the only installation to be attacked by an enemy since the War of 1812.

Shortly after World War II, Fort Stevens was deactivated as a military fort. The development of improved air power and guided missiles made coastal artillery forts such as Fort Stevens obsolete. By 1947, all of the guns were removed and much of the fort was turned over to the U.S. Army Corps of Engineers. The Corps used the area as their headquarters for maintenance activities at the mouth of the Columbia River. In 1975, Oregon State Parks leased the old fort area and are currently restoring and interpreting Fort Stevens.